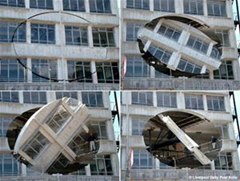 holds affinities to Gordon Matta-Clark's site specific "building cuts" from the seventies. Wilson created a rotating cut facade, which reveals the building's interior with each turn.

From the Daily Mail,

"...Turning The Place Over is the brainchild of sculptor Richard Wilson, who cut an egg-shaped section out of the derelict building opposite Moorfields station in Liverpool, fixing the eight metre diameter piece on a pivot. Mr Wilson is one of Britain's best known sculptors. He has been nominated for the Turner Prize twice and represented Britain at Biennial festivals across the world."

While you're stuck at home, make the most of your time by learning a new language, skill, or even train for a remote-work job with our new premium online courses.

That is just so cool!

y would yu want that..

The Mass Annoyance 10 years ago

That's our City for ya! :) Liverpool is the best!

what about the people they will rotate the head from the neck to????

Shweet... I love it for the artistic point of view!! But, whats the benifit of having something like that?
ADD>> Oooo it'd b cool to see it catastrophically fail (without lives being in danger). Am i a bad person for saying that? Nah...

Art is always supposed to make you think and be what no one else is looking for. This is true art in that sense. Cara, you are going to have to go to Liverpool now to see this!!
http://kitsunenoir.com/blog/2009/10/27/stephane-halleux/comment-page-1/#comment-52215