Oleg Mavromati's latest project, Ally/Foe, allows online voters the chance to electrocute the Russian artist at a mere fifty cents a pop. From November 7th to November 13th, viewers of Mavromati's livestream can pay to vote "innocent" or "guilty." 100 guilty votes result in the artist voluntarily shocking himself in front of the camera, live, with his homemade electrocution machine. 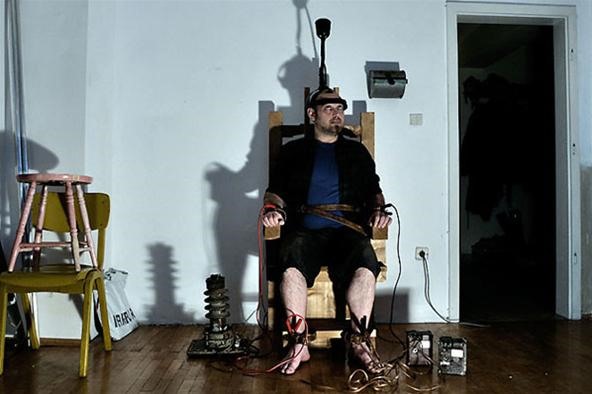 "Since 2000, Mavromati is being criminally investigated for 'inciting religious animosity' under Russia's strange Article 282, an article that helps censor artists, nearly jail curators and almost criminalizes 'heresy.' Ten years ago, Mavromati mimicked a crucifiction for a film near a cultural institute. Zealots called him a Satanist. Cops went after him. Fleeing persecution and censorship, he exiled himself to Sofia, Bulgaria, where this action is taking place.

The aim of Ally/Foe is to 'to bridge the gap between the accuser and the accused,' to 'shed the superfluous specifics of the current criminal system' and create 'the most democratic method of punishment or mercy.' You vote. His bare skin gets electroshocked. Or not. It's all up to 'your vote and conscience.'"

that is sick.
its the real world SAW MOVIE